How many panels & how much roof space for a 10kW solar system?

Most residential solar panels have a output rating of 330W to 400W meaning a 10kW system will need 25-30 solar panels and will require about 80 m2 of roof space. More efficient solar panels will reduce the roof space required and typically cost more as they are utilising newer technologies.

How much does a 10kW Solar System cost?

Solar Choice publishes a monthly Solar PV Price Index that tracks average pricing trends in every capital city in Australia. According to Solar Choice’s own data, the average 10kW solar system price in Australia as of November 2021 is about $0.91 per watt – or about $9,090 after the federal STC rebate is deducted.

The graph below provides a snapshot of price trends for 10kW solar systems in capital cities around the country. You can see that the price has come down significantly over the last decade but has remained relatively flat for the last few years. Compare quotes from up to 7 installers in your area now.

How much energy will a 10kW Solar System generate?

Depending on a number of factors, the actual power output of a 10kW solar power system will vary. These variables include:

–Orientation and tilt angle of the solar panel array

–Whether there is any shade cast on the panels

-Operating temperature of the panels

The table below gives indicative figures for how many kilowatt-hours of energy a north-facing 10kW solar system will generate per day (on average throughout the year) in Australia’s capital cities.

Is a 10kW solar system right for you?

10kW solar systems are on the large side for residential installations (where 5kW to 6.6kW is much more common). So as mentioned above, 10kW systems tend to be most appropriate for homes with significant amounts of daytime electricity consumption (or businesses with about 40kWh of daytime usage). They may also be a good size choice for homes who have low electricity consumption and want to go off-grid (see: “Can I go off-grid with a 10kW solar system?“)

The table below should give you some idea about whether or not a 10kW system may be well-suited to your needs – or if a better system size might be a better match. We recommend that you self-consume at least 30% of the the solar energy that your system produces.

Remember: The table above is a highly generalised, indicative guide; it does not take into account your location or the tilt & orientation of your roof. If you’d like to take a more detailed look, use our Solar PV System Payback Estimator or our Simple Solar System Sizing Estimator.

Also keep in mind that your network company may have a default limit on solar system size – they may not allow you to connect a system larger than 5kW to the grid without extra paperwork and inspections.

Compare quotes from up to 7 installers in your area now.

What is the financial return for a 10kW Solar System?

These days solar feed-in tariff credits are a secondary benefit from having a solar system installed. Instead,  you’ll derive the most value out of your self-generated solar energy by ‘self-consuming‘ it – using as much energy as possible directly. Because solar feed-in tariff rates are generally lower than what you’ll pay for energy from the grid, the more solar energy you use yourself, the more you’ll save; meanwhile, the excess solar will flow into the grid and earn you credits which help to reduce your overall bill.

The table below gives a rough overview of the difference between retail electricity rates and solar feed-in rates by city, based on some of the most competitive offers available. 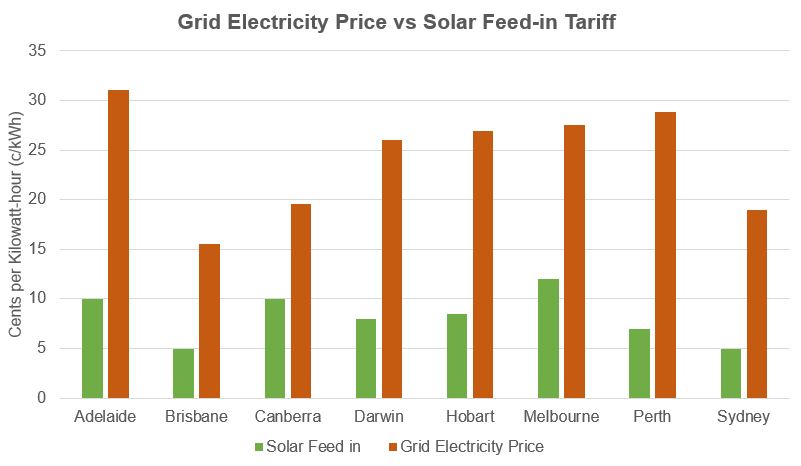 The table below takes a look at payback times and internal rate of return (IRR) for those who install a 10kW solar system in select cities at two rates of self-consumption – low (30%) and high (60%) for a household that uses 35kWh of electricity per day at the rates listed in the table above. If you manage to achieve even higher self-consumption rates, the returns will look more favourable.

Our assumptions not accurate for you? Calculate your own specifics with our Free Solar Payback Calculator

Compare online quotes for up to 7 installers that cover your area now.

Since 2008 our knowledge and sophisticated software has allowed over 160,000 Australian households and businesses to make a well-informed choice of solar power installer.